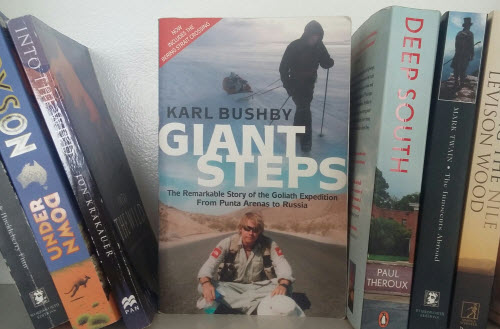 My latest book recommendation for solo travelers is Giant Steps: The Remarkable Story of the Goliath Expedition From Punta Arenas to Russia.

The back story is that in November 1998, Karl Bushby, a 29-year-old British ex-paratrooper, set out to walk from Punta Arenas in far southern Chile to his home in Hull, England. That’s a distance of approximately 36,000 miles (58,000 kilometers) or 1 1/2 trips around the world at the equator. He estimated it would take him about 12 years to accomplish the feat. Twenty years and numerous major detours and delays later, he’s still at it.

This book covers the journey from November 1, 1998 when Bushby departed Punta Arenas to March 31, 2006, when he stepped off the frozen Bering Sea and onto Russian soil.

I abide by a few hard and fast rules. I will not advance the expedition using any form of transport other than my feet, and, if I must detour — for example, to renew a visa — I resume the walk from the exact spot where I left off. (Introduction p. xxi, Giant Steps)

The book consists of a very long series of detailed journal entries written at the end of most of the days of the walk. Interspersed within them are occasional explanatory paragraphs added later by either Bushby or an editor. These describe what was going on behind the scenes as Bushby was walking.

The reason this book is such an interesting read is not the quality or the nature of the journal entries. In fact, most of them deal with the sorts of “mundane” challenges one would face during a 34,000-mile walk. For example, Bushby talks a lot about being hungry, being near penniless, being beaten down by the elements, and being exhausted. In addition, the journal occasionally inexplicably jumps by weeks and even months, which is understandable given the conditions he was living under. Nonetheless, it’s also kind of frustrating to miss out on the stories from those missing dates.

The truly remarkable thing about Bushby’s book is that he kept going. Despite hunger, cold, exhaustion, and at times, despair. He never cheated, he never gave himself a break, and he apparently never compromised the rules he set at the outset.

Best section of the book

For me, the best passage in the book deals with Bushby’s attempt to cross the Darien Gap. This is a 90 mile wide “no man’s land” of dense jungle and huge swamps on the Colombia and Panamanian border. No roads and few marked paths run through it. To make matters worse, a guerilla war was raging in the region. And the local rebel forces had a habit of taking and ransoming or killing hostages. Yet he never seriously considered not heading into the Gap. Because there are no bridges in the region and because Bushy refused to rely on any form of transportation other than his own two feet, he was forced to floated and swim across each of the rivers he came to.

I drift near the bank, where I am better camouflaged. Boats pass all the time, sometimes coming quite close, but I am not spotted. It is windy at times and the water becomes choppy, which does not help my progress. Now and then I hear a loud ‘splash’ as something enters the water and I’m left looking about, trying to see what it is. I am constantly on the lookout for crocodiles. Normally it’s just a large iguana. — Chapter 5, “The Darien Gap,” Giant Steps.

Second best section of the book

Bushby’s 58-mile journey across the frozen Bering Strait is no less enthralling to read about. Because the Strait only freezes for a brief time and does not do so every year, Bushby had to jump when the opportunity presented itself. For 14 days he and another explorer struggled to reach Russian soil. They dragged their gear over frozen mounds of ice and around open leads of water. They pushed on through heavy snow and blizzard conditions. On occasion, they actively avoided hungry polar bears. And they did it in bitterly cold temperatures.

We move between slabs of ice, some the size of a living room, others the size of a sofa. Inevitably, and with regularity, we sink into the water, the ice rolling away beneath us. We try to pick the best route, helping each other when necessary, but it is painfully slow. —Chapter 10, “The Bering Strait,” Giant Steps.

There are two major takeaways I got from this book, both of which make it well worth reading for anyone who loves to travel solo or dreams of doing so one day. The first is that travel isn’t always fun and easy. Sometimes it’s really hard and lonely and exhausting. But in the end, it makes you stronger and more confident and more at peace with yourself and the world. The second takeaway is that no matter how well you plan and strategize, things go wrong. Being able to rebound and work through those times is what makes a simple trip into a true adventure.

The book ends with Bushby setting foot on Russian soil on March 31, 2006. To read more about what has happened to him and the journey in the past 12 years, refer to the Wikipedia entry about him. 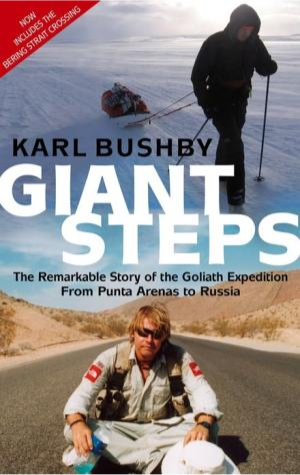 If you liked this book, you might also enjoy Levison Wood’s Walking the Nile. This gripping true story recounts the author’s successful attempt to walk from the source of the Nile to the Mediterranean. You can read my review of that book by clicking here.