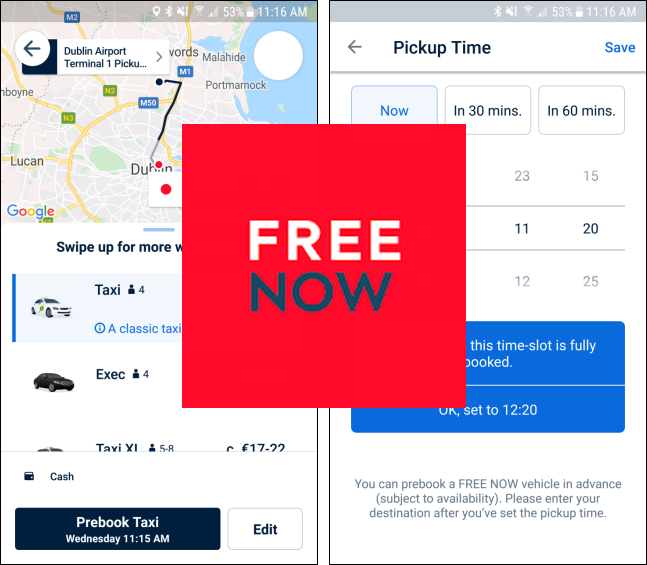 January 11, 2020: Based on feedback from readers and media reports, we’ve rewritten this article to reflect the changes that have recently been made to the Uber in Ireland alternative. The Uber-like app, which was called MyTaxi.com, has been renamed to Free Now. Why a taxi-hailing company would voluntarily rebrand from MyTaxi to Free Now is beyond me. Secondly, although it’s free to use the app, from July 2019, you get charged a 5 euro fee if you book a taxi and then decide to cancel it. Not exactly “free” now is it?

In addition, after a December 2019 app upgrade, a large number of users are reporting getting the same error message when trying to use the app. After logging in, the screen displays,  “We’re sorry, something went wrong. Please try again in a few seconds.” The solution is to clear your phone cache, but this is another indication of why so many users are turning away from what was a massively popular app.

If you’re wondering if there’s Lyft or Uber in Ireland, the answer is “not really.” Lyft does not operate (yet) in Ireland and Uber can only be used to call a taxi or limo. That’s because private drivers in Ireland are not allowed to carry paying passengers. In order to charges fares, a driver must hold a taxi license and have taxi insurance. Despite this restriction, however, there is a (now somewhat less) popular Uber and Lyft alternative called Free Now, formerly known as MyTaxi.

FreeNow is simply a way to book a taxi in advance and know how much your fare is going to cost. It also gives you the option of paying by credit card, so you don’t have to have money on you when you’re in the taxi. The app can be downloaded to your mobile device and used in major Irish cities as well as in 8 other European countries. If you’re in a city or at the airport, there’s no real advantage to using the app versus hailing a taxi yourself.

In Ireland, Free Now is available in the following cities:

Free Now has both an Android and iOS app as well as a web page for ordering a taxi. And up until it started charging fees for cancellations, it was wildly popular in Ireland. According to the Irish Times newspaper, “By 2017, one-fifth of the Irish population had its app installed on their phones.” (“How Mytaxi killed Irish taxis and now owns the future,” May 15, 2019)

Like Uber and Lyft, Free Now has a very intuitive workflow so you won’t have any trouble booking a taxi.

Once you enter your current location and destination, the route you’ll take appears on a map. Below it, you can choose the kind of taxi you want to take. 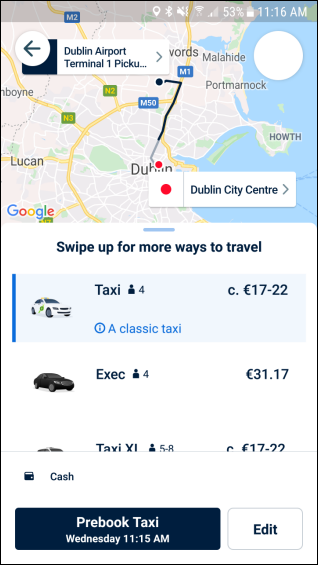 After tapping the Book Taxi button (or Prebook Taxi button if you’re booking in advance), a confirmation screen appears. Your current location, destination, pickup time, and taxi choice are listed on the screen for you to review.

Like Uber and Lyft, Free Now allows you to do any of the following:

Unlike Uber, at the end of the journey you have the option of paying by cash rather than by debit, credit, or PayPal. This is specified during the booking process.

The following additional options, some of which add a significant cost to the fare, can be requested when booking a car: