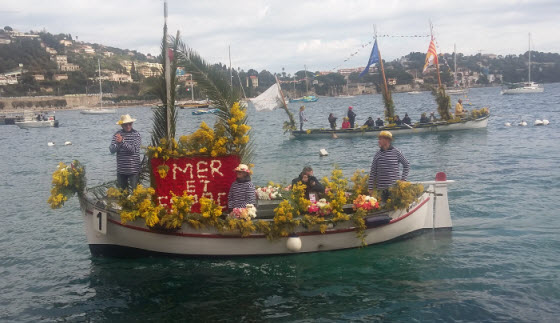 The Villefranche-sur-mer Naval Flower Battle features up to 20 local fishing boats decked out in elaborate flower arrangements. The day begins with a short parade on land. And by short, we mean about 250 yards from start to finish. It’s so short, in fact, that by the time the last group begins walking, the first group is done.

This is followed by a naval parade wherein the boats sail close to the shore and the spectators take photos. After that, the boats come back around. This time as they go by, they throw flowers at the people lined along the shore.

In theory, the people on the shore are supposed to “battle” with the crews by throwing the flowers back at them. In reality, though, most people keep the flowers they catch rather than throw them away. The real battle therefore tends to be between the spectators who are all trying to get as many flowers as possible for themselves.