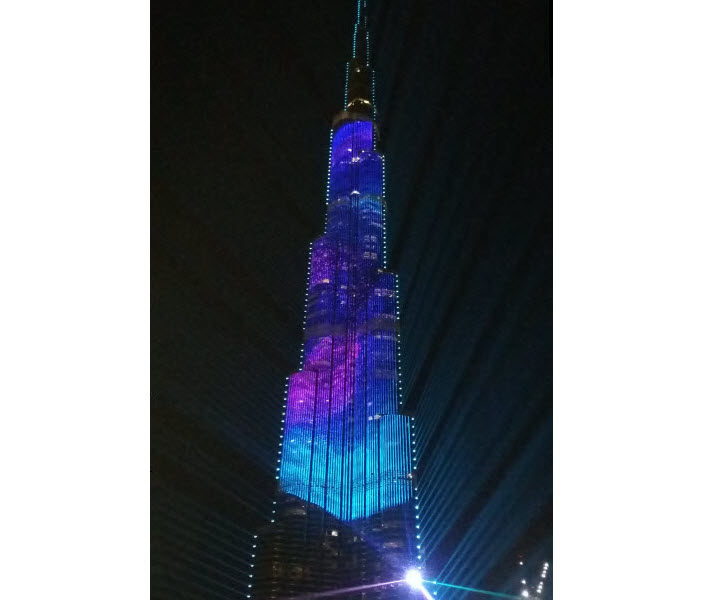 Laser light show on the Burj Khalifa tower in Dubai, United Arab Emirates. Aside from minor cropping, this photo is unedited. The light beams, colors, and dotted lights around the building appear exactly as they did during the show.

Originally staged as part of Dubai’s New Year’s Eve 2018 celebration, the light show drew such large crowds that the show ran twice a night through the end of March 2018. Because of the success of the first show, in June 2018, the management of the Burj Khalifa sponsored a new laser show called Soar. As expected, it too was a hit with tourists.

The Burj Khalifa is currently the tallest tower in the world. Reaching 2,722 feet (830 meters) into the air, it has 160 floors and is a mixed-use development. The ground floor is connected to the enormous Dubai Mall, while upper floors house offices and apartments. Tickets to the top observation deck cost about $100 (seriously).

Little known fact: The Burj Khalifa is visible from 9 billion miles in space. Or something like that. I lost the brochure containing information about it.

The Jeddah Tower in Saudi Arabia is set to open in 2020. On completion, its height of 3,281 feet (1 kilometer) will knock the Burj down to second place.