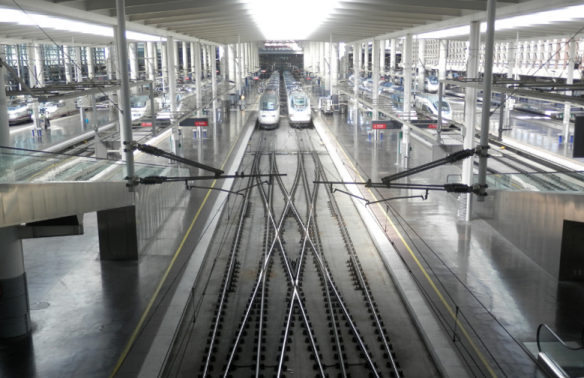 Semi-True Tales from My Life So Far: A Real Player in Madrid

So I recently spent the weekend in Madrid meeting up with an old friend from Japan. We had a great time hitting the regular haunts. Hemingway’s bar in Plaza Santa Ana, where we took turns throwing tapas at passing tourists. Museo del Prado, where I earned bonus points for staying awake while viewing all 500 Madonna with Child paintings. And Plaza del Sol, where Chris won the weekend by sitting on Dirty Mickey Mouse’s lap. “Dirty” as in “smelly, unwashed, and grayish brown.” Not dirty as in “perverted.” Though maybe the guy in the suit was that, too. It was a great time, but nothing we did would actually rank up there with my other semi-true tales.

On Sunday afternoon, though, things got a lot more interesting. With my small gym bag in hand, I headed to Atocha station to catch a train back to my apartment in southern Spain. Now, at Atocha the ticket office is on the ground floor. Which is normal. But to get to the trains, you have to go up to the second floor. Don’t ask why — that’s just the way it is. In Japanese, a floor plan like that would cause many a traveler to mutter “shikata ga nai” under their breaths (roughly translated, it means “No use bitching about this sh*t, ain’t nothing I can do about it”). In Spain, though, everyone is usually talking and drinking or talking and hung over, so no one notices things like stupid architecture. Or muttering Japanese tourists. But I digress.

So, I buy my ticket and head toward the moving sidewalk that carries people up to the second floor. Now because the second floor is actually 30 feet or so above the first floor, the moving sidewalk is divided into two stages. The first half, you face into the train terminal. You then reach a landing, make a 180 degree turn and step onto the second moving sidewalk. This sidewalk ends at a large terraced area beyond which is security. When you pass through security, you then head back down to the ground floor on an escalator to your train platform. Shikata ga nai, again.

So as I approach the first part of the moving sidewalk I see a group of really well dressed guys stepping onto it. They’re all decked out in identical navy blue suits and pulling wheeled travel bags with a Nike swoosh on them. And all of the guys are in their early to mid twenties so I naturally assume they’re some college team or something. Just as I reach the sidewalk, there’s a gap in the group and I step onto it with about 10 of these guys in front of me and about 10 behind me.

And the sidewalk slowly slides forward until we reach the little landing. A quick 180 degree turn, and we’re all suddenly heading the other direction. At this stage, I’m not paying much attention. It’s a moving sidewalk, not a hoverboard or anything exciting like that. And as the sidewalk gets closer to the upper terraced area, I look up and see 8, count ’em 8, television cameras pointed down at “us.” Along with what must be two hundred ecstatic madrilenos. They’re snapping pictures. They’re taking videos of the team. And a whole lot of them are waving Real Madrid scarves and pennants. At last, I think, a new entry in my semi-true tales series!

At this point, some of these players start smiling and waving to the crowd like the good sports they are. I’m right in the middle of it all, so I figure it’s only polite to join in. So I smile and wave at our fans and keep walking along, surrounded by my new teammates. Right through the media scrum and the security checkpoint. I got a lot of puzzled glances from reporters and fans, but no one stopped me. And so, for a brief and shining moment, thanks to a small gym bag, unusual architecture, and absolutely perfect timing, I was something I’ll never be again: a Real player.