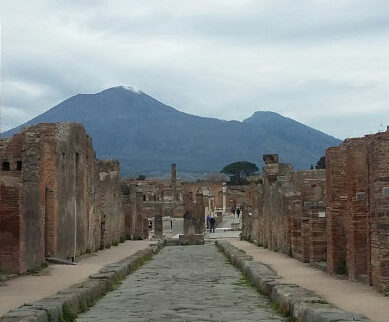 Before the huge eruption of Mt Vesuvius in 79 AD, the two peaks in this image formed part of a much larger cone shaped volcano. Falling ash and pyroclastic flows eventually buried Pompeii to a depth of as much as 17 feet in some areas. Nearly 2,000 residents of this town, alone, died during the event. In the beginning, collapsing roofs and falling rocks were the primary causes of death. As the eruption continued into the second day, though, the situation changed dramatically. Super-heated pyroclastic flows began racing down the volcano, killing everyone and everything still left in the area.