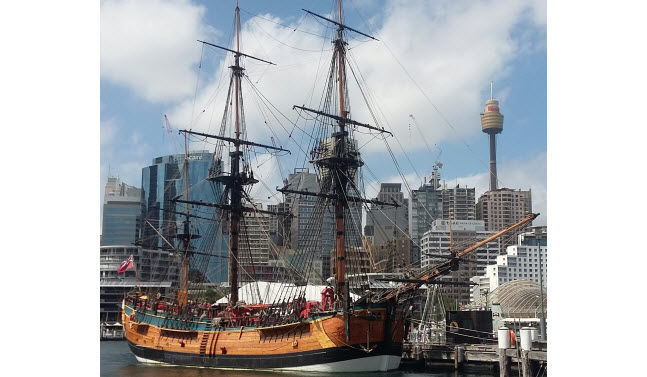 Replica of the HMS Endeavour that Captain Cook sailed into Botany Bay (Sydney) in 1770. Cook’s “discovery” of Australia was a huge surprise to the local aboriginal tribes. Until he arrived, they hadn’t realized Australia was missing.

This replica is part of the Australian National Maritime Museum in Darling Harbour, Sydney. Entrance to the main exhibits is free for everyone. However, if you want to board the three large vessels outside, it’s a different story. Access to the Endeavour, the destroyer HMAS Vampire, and the submarine HMAS Onslow requires the purchase of a ticket. At AU$32 (roughly $23.50 US), it’s not cheap, but it’s worth it if you’re at all interested in Australia’s naval history. Click here for ticketing prices and information.

Little known fact: The koalas and kangaroos Cook brought with him from England flourished in their new country. That’s why there are so many of them in Australia but very few in England.