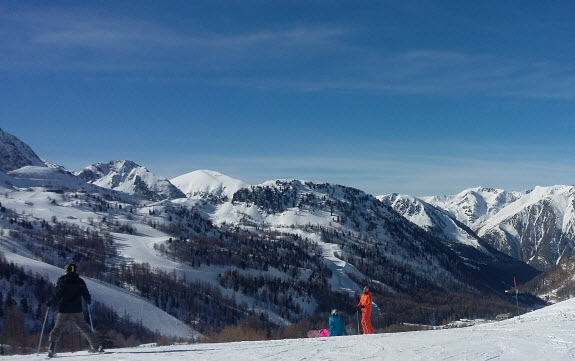 Snowboarding and Skiing Near Nice: Isola 2000

Despite it’s location on the French Riviera, it’s possible to go snow skiing near Nice during the winter. One of the most accessible ski fields is Isola 2000, 60 miles north of the city. Set in a high valley inside Mercantour National Park, the ski field gets its name from its altitude (2000 meters/6560 feet) rather than from any association with the year 2000.

The park contains 7 green runs, 21 blue runs, 11 red runs, and 3 black runs, making it an ideal place for beginner and intermediate skiers looking for fun skiing near Nice. To reach the runs, skiers have access to 2 gondolas, 7 chairlifts, and 10 tow ropes. 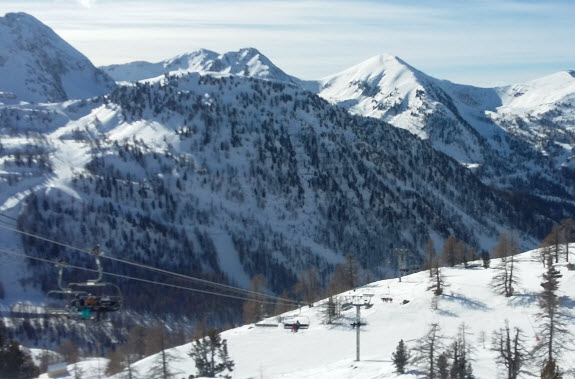 What sets this ski field apart from many in the U.S. and elsewhere is the length of the runs. A lot of them, particularly the green ones, are very long and broad as you can see in the image below. Because the slopes are also not generally very crowded, skiers have a lot of time and room to work on their technique. That makes skiing near Nice a lot more fun and a lot more tiring than you’re used to! 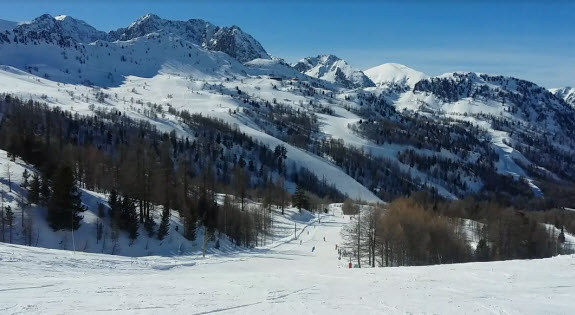 The entire ski field is set within a natural bowl surrounded by steep mountains. As a result, winter storms tend to get trapped in the valley, causing snow to accumulate quickly. The lack of development outside of the immediate area around the resort makes for spectacular views in nearly every direction. 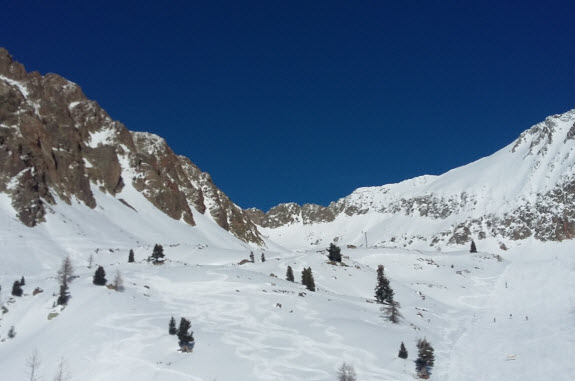 Despite these bonuses, the limited variety of expert runs might be an issue for advanced skiers planning to ski for more than one or two days. Those looking for more of a challenge when skiing near Nice should stay on route M2205 as it passes through Isola Village and head an additional 20 minutes up the main road to Auron ski resort.

How to Get There

Note that Isola village is 9 miles away and nearly 4,000 feet lower than the ski field. If you take the bus to go skiing near Nice, ride it until the end. Do not get off in Isola Village or you’ll have a long, snow-less wait until the bus returns.

Takes about 1 hour and 40 minutes from Nice Airport, heading due north toward Auron. Click here for Google Map directions.

Depending on the time of the year, there are only two or three regular public buses a day up to Isola 2000 and only two back. To download the latest schedule, click here.

To go by regular bus, catch the #750. The route begins at the main Nice bus station (gare routière) located at 14 Avenue des Diables Bleus. Or pick up the bus at Nice’s main train station, Gare de Nice-Ville. Due to construction at the train station (as of February 2018), the bus stop has moved. It is still on Avenue Thiers, but is now about 100 yards west of the main entrance to the station. You can also pick up the #750 at Terminal 2 of the Nice Airport. The bus that takes you arrives and departs from bus platform 6.

Regardless of where you get on to go skiing near Nice, the bus trip will cost you only 1.50 euros (one euro and 50 cents). It takes the bus a full hour to go from the main bus station to Terminal 2 at the airport — a distance of 6.3 miles — so if you’re anywhere near the airport, pick the bus up there and save yourself an extra hour of crawling along in traffic. From the airport, it is another 2 hours up to Isola 2000.

The Bus 100% Neige is an express bus, confusingly also numbered #750. It gets you to the ski field in about 2 1/2 hours and costs 6 euros. If you want to ride it, you must book online at least 48 hours in advance. You cannot buy the tickets in person at the bus station or from the driver. The bus also only stops at the airport if requested, so on your return trip notify the driver if you need to go to Terminal 2.

To access the metro page containing links to the booking site and to the latest schedule, click here. The bus schedule varies depending on time of year and day of the week, so consult the schedule before booking.

How Much It Costs

The following rates are for access to all runs on a single day or half day during the 2019-2020 season. Refer to the Isola 2000 website for the most current rates on multi-day or senior passes.

In addition, Isola 2000 offers super discounted passes if you only plan to ski on beginner (green) runs. The following are the 2019-2020 rates for that.

The ski field also offers ski lessons, family passes, and season passes. The prices for each of these can be found on the official website for Isola 2000.

Although there are a lot of condominiums and hotels at Isola 2000, it’s a surprisingly expensive place to stay. The hotel I stayed at, Le Pas du Loup, had some of the smallest hotel rooms I’ve ever seen. And it cost about as much as a good hotel in Nice. They made up for that, though, in a couple of signficant ways. First of all, like most of the hotels at Isola 2000, it’s located directly on the ski slopes. 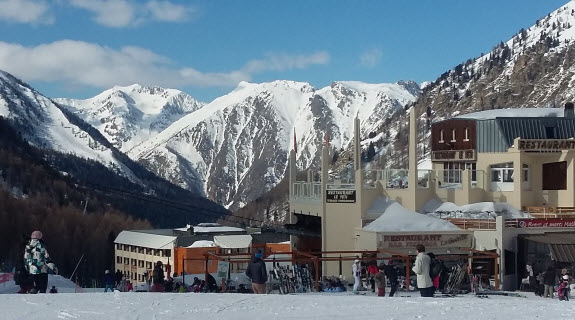 Secondly, the room rate included a free buffet breakfast each morning. And a free lunch buffet and free non-alcoholic drinks and snacks all day long. The savings from not having to buy those meals each day made the cost of the room acceptable.

To access a list of the hotels and condominiums available at Isola 2000, click here and then click the Se Loger link in the menu bar. Note that the hotel link won’t display correctly if you are looking at the English version of the website.

Isola 2000 is a popular destination so it’s no surprise that there are a total of 15 restaurants to choose from. Six of them are in the series of interconnected buildings that contain three of the four hotels and most of the stores in the area. Nine more restaurants are scattered out on the ski slopes, most within a four- or five-minute walk from the main building. 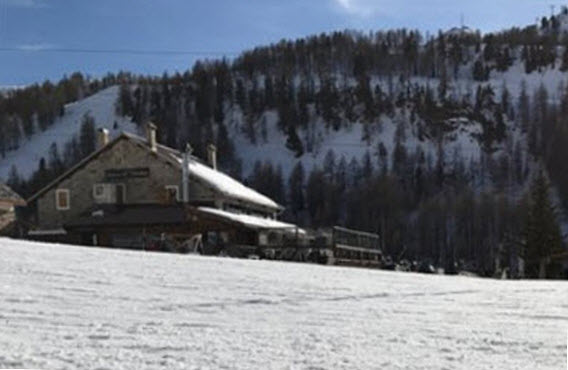 Cuisine choices range from pizza and pasta and Irish pub grub to crepes and burgers and French cuisine.  Prices are roughly equivalent to what you’ll pay in Nice.