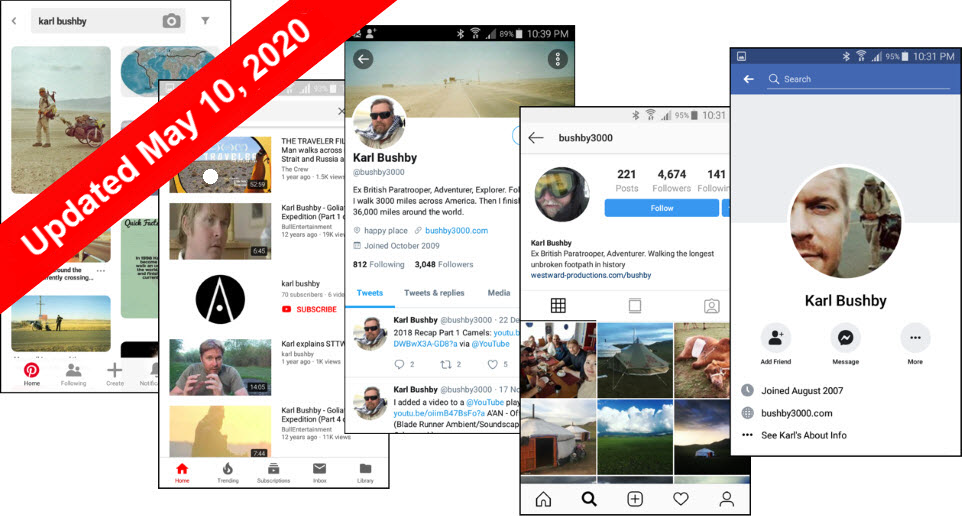 That’s a good–and popular–question. If you don’t know who Karl Bushby is, check out our review of his book Giant Steps: The Remarkable Story of the Goliath Expedition: From Punta Arenas to Russia. It’s the fascinating story of the first part of the epic walk he is undertaking from southern Chile back to his home in England. The total distance will be approximately 36,000 miles (58,000 kilometers) or 1 1/2 trips around the world at the equator. He originally estimated it would take him about 12 years to accomplish the feat. Twenty years and numerous major detours and years-long delays later, he’s still at it.

**I get a small commission on any sale made through the Amazon link above.

So where is Karl Bushby now?

Busyby was just interviewed by Rebecca Stephens of Sharbek Associates, a specialist management consultant group. The topic of the interview was “Resilience Through Uncertain Times,” and it provides a fascinating insight into the way Bushby views the world and the challenges he and everyone else faces. One of the best lines of the 24-minute discussion is when he states:

Note: This is Sharbek Associate’s video, so all clicks on it count as traffic to their account. The copyright is theirs alone. I’m simply linking to it in accordance with YouTube’s Community Guidelines.

Just this evening Bushby posted an update on his Facebook account detailing his months-long struggle to get permission to enter Iran. It’s not a hugely long post, but for Bushby, who goes years without saying anything online, it’s practically a novel. And one that’s well worth reading – check it out by clicking the following link: https://www.facebook.com/Karl.Bushby.odysseyXXI.

Bushby has a highlight reel on YouTube covering the years 1998-2017 that we discovered the other day. Check it out, it’s got some amazing footage.

Note: This is Bushby’s video, so all clicks on it count as traffic to Bushby’s account. The copyright is his alone. I’m simply linking to it in accordance with YouTube’s Community Guidelines.

In addition, the online newspaper El Informador, which covers news of Jalisco, Mexico, published an interesting interview with Bushby yesterday. It’s in Spanish, but Google Translate does a good job of converting the text if you don’t habla Español.

From the article, we find that he arrived at the Iranian border on September 15, right around the time that Iran attacked a Saudi oil refinery. Tensions were very high and Bushby’s British passport made getting a visa practically impossible. At the moment, he is trying to decide whether it’s better to keep searching for someone who can help him get the Iranian visa. Or avoid Iran entirely by heading north around the Caspian Sea, re-entering Kazakhstan and Russia and approaching Turkey from the north, through Georgia. Given his past difficulties with Russian visa bureaucracy, it’s not an appealing alternative. As he says in the article, “Iran is the last country: if I pass it I will get home.” In other words, this should be the last major hurdle in his 20-year-long trek. We’ll keep you posted.

He’s still in Mexico. We’re just posting this so you know where Bushby is as of the start of 2020.

Another Facebook post shows Bushby at a birthday celebration in Cihuatlán, Mexico. Rather than post every time he attends a party or goes to a bar in Mexico, we’ll save our next update until we get some news about his journey, specifically his success or failure to get a visa to cross into Iran.

Our search today of all of Bushby’s social media links produced a hit. His Facebook page (linked to below) shows him celebrating with friends at a bar in Mexico in a post dated October 12. So it looks like his visa issues with Iran have not been resolved and he’s decided to wait it out somewhere cheap and warm and friendly. We’ll update this page again as soon as we get more details.

As of today, Karl Bushby is on the border of Turkmenistan and Iran, after walking through Kazakhstan, Uzbekistan and Turkmenistan. His problem in this part of the world is obtaining visas. His initial request for a visa for Iran has been turned down, and consequently this is going to lead to protracted negotiations to get even a tourist visa. Everything hinges on getting around the Caspian Sea. Going to the North would take him back into Russia, towards the Ukraine and the area where there is a virtual war going on at present. Would the Russians let him into this area? The Russian authorities and Karl have never been the best of friends ever since he arrived unannounced after crossing the Bering Straits. They let him carry on, but it was plain they were just about tolerating him and upsetting them again was not a good idea.

The red line below shows the presumed route Bushby took through Kazakhstan, Uzbekistan, and Turkmenistan in order to reach the Iranian border. We’ll update the map if we find out anything different. 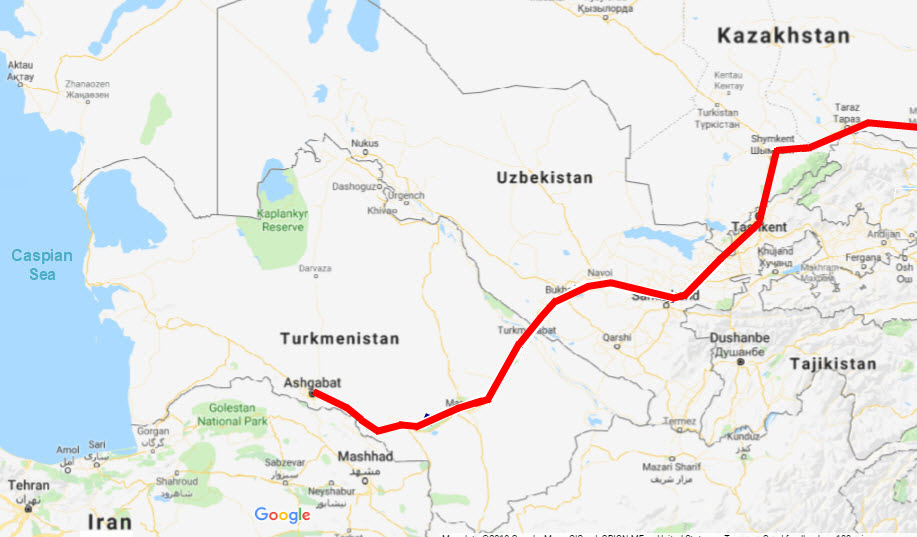 We still haven’t figured out where exactly Bushby is at the moment, but one outstanding question has been answered. How is he planning to reach Turkey? There are two ways to get there from Kazakhstan. The first is to walk around the northern end of the Caspian Sea, which would require Bushby to re-enter Russia. Given his past difficulties getting permission to walk in Russia, that seemed an unlikely route. The alternative is to walk around the southern end of the Caspian through northern Iran. Based on a July 5 message he posted on Facebook, it looks like this is the route he’s planning to take. That means he’ll head south through Uzebekistan and Turkmenistan and then walk across the northern edge of Iran toward Turkey. We’ll update this site as soon as we get more information about his current whereabouts and/or the details of his proposed route.

On July 11, the Wikipedia page relating to Bushby was updated with a single line:

The change was made from a mobile phone using an IP address based in Tblisi, Georgia. Given the long distance between Uzbekistan and Georgia, it seems unlikely that Bushby, himself, made the update.

We’ll continue to follow all of Bushby’s social media accounts and continue running web searches in English, Uzbek, and the languages of each of the countries he might be heading to next. As soon as we find out which town he is/was in, we’ll update this post.

Bushby is currently somewhere in Uzbekistan, though we haven’t found out yet exactly where he is. In the map below, the red line is the section of the walk he completed between the events listed at the end of his book (2004) and November 2018. 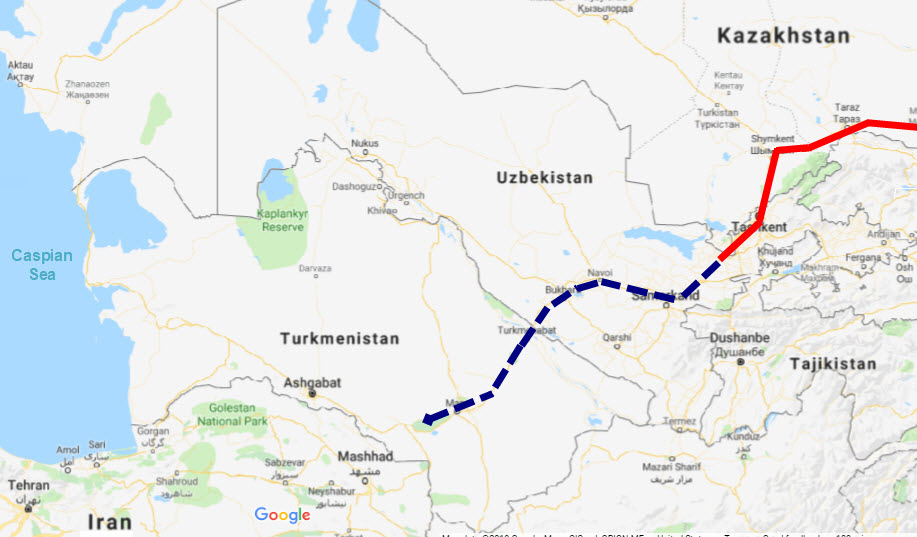 It’s now September 2019 and an extensive web search of Bushby’s name continues to turn up loads of broken and outdated links. The Goliath Expedition website was last updated in 2008 and the next iteration of the trek, called Odyssey XXI, has a web link that leads to an inactive page.

However, thanks to scouring social media, we’ve been able to piece together the following details.

Someone is updating Bushby’s Wikipedia profile, adding small lines updating his location. The latest appeared on July 11, 2019, explaining that Bushby has been in Uzbekistan since early June 2019.

March 10, 2020: After months of silence from Bushby, himself, he’s just posted a fairly long (for him) and detailed summary of what’s gone on in his trek since September. Click the header of this section to jump to the post – definitely worth a read.

. In it, he’s celebrating a birthday with friends at a bar in Cihuatlán, Mexico. Our guess is that his visa issues with Iran are taking a lot of time to work out and he’s planning to spend the winter somewhere warm and inexpensive. That’s just speculation at this point – we’ll let you know when we find out more.

His most recent post is from October 16, 2017. He’s shown having a meal with the Steppes To The West (STTW) team as they prepare for the first stage of their latest expedition. A team of 6 people and 10 camels planned to travel from Ulaanbaatar, Mongolia all the way to London. However, by January 2018, Bushby and most of the other members had gone their separate ways.

The account called Karl Bushby has no boards and no pins associated with it. A search of the name Karl Bushby brings up a dozen or so pins, but none with recent information.

The account for Karl Bushby contains very few tweets. The latest tweet is from December 2018, a simple reposting of the Facebook link relating to the camel trek. This link will take you to the latest tweets written about, but not by, Bushby. As with the Pinterest pins, there is currently no recent information available.

Bushby’s YouTube channel has only 3 videos on it and only 2 are about him. However, a search for the name “Karl Bushby” brings up a longer list of videos. These include the four-part series about the Goliath Expedition, the first part of the Camels series, and a number of interviews and short news items about his journey, dating back a decade or more. The most recent video, the recap of 2018, dates from January 2019.

Help us fill in the gaps

If you have current and reliable information about Bushby’s whereabouts, please let us know via the Comment section below. We’ll be happy to add it to this post so everyone can keep abreast of his monumental endeavor.