First published in 1975, Paul Theroux’s The Great Railway Bazaar chronicles the author’s four-month rail journey from England to Japan via the Middle East and Asia and back again via Russia. Despite its age or perhaps because of it, it’s a very entertaining and surprisingly honest and refreshing read.

This is not a travel book about how wonderful it is to go places and how charming and fascinating other people are. Rather, it’s a book that describes the events Theroux experienced and the people he encountered. He doesn’t soft pedal the details or try to come up with excuses for why some people were unpleasant or irritating or vulgar. In a public speech in 2017, Theroux described the mindset he had before he set out to write the book:

If I ever write a travel book, it’s going to . . . . have dialog, description, humor, and also I’ll be candid about how I feel. Am I having a good time? Am I having a bad time?
— Theroux’s speech at the John Adams Institute (January 2017)

Unlike many travel guides, Theroux is much more interested in describing the “human architecture” around him rather than the physical architecture. The way people talk, look, smell, and sound and interact with the world. When he passes through India, for example, it’s the lilting voices and rhythmic speech patterns of the locals that he focuses on. He rarely mentions specific buildings or tourist attractions. The result is a more appealing and more intimate glimpse into the communities through which he passes.

The benefits of traveling by rail

In the Preface added to the book in 2008, Theroux explains why he chose to undertake the trip via rail instead of by car or plane or bus. He writes:

Trains seemed the happiest choice. You could do anything on a train; you could live your life and go long distances. There was little stress, there was sometimes comfort, and there was something romantic in the notion of boarding a train. I had grown up within earshot of the Boston and Maine, and the train whistles I heard as a youth were the music of enchantment.
— Preface to The Great Railway Bazaar

Travel as an endurance sport

The journey Theroux describes isn’t one of “enchantment.” Rather, it is one of “endurance.” He puts up with corrupt railway employees, unreliable train schedules, and bad food. He faces cramped accommodations and weeks of idle afternoons spent staring out at bleak landscapes. And yet, the book ultimately acts as a siren call to the railway life rather than a cautionary tale against it. Because, despite it all, the journey as a whole is interesting, even when the individual components seem to Theroux not to be.

At times this feeling of experiencing a futile convalescence on the Trans-Siberian turned into a simpler occasion for boredom; simulating my bad dream, it was like being snowed-up in a mountain cabin. It was cold, the light was poor, and it was hard to move around the train since most of the passengers . . . preferred to stand in the corridors. And really, there was nowhere to go.
— Chapter 30, “The Trans-Siberian Express,” The Great Railway Bazaar

Reading this book, it struck me how much the way we travel has changed in the past 45 years. Theroux crossed countries that no longer exist or are no longer open to visitors. He rode train lines abandoned now for decades. And because he is a natural storyteller, he was able to connect with his fellow passengers and record their stories.

The book’s impact on travel writing

In introducing Theroux at a literary talk in 2017, moderator Hans Bouman described The Great Railway Bazaar as having “revitalized travel writing…. stirred a reading audience… [and] made the travel book very popular once again.” With its abundance of honest insights and entertaining descriptions, it’s no wonder that this book continues to attract audiences nearly five decades after it was written. The world has changed, but the book’s appeal to the traveler’s spirit has not. 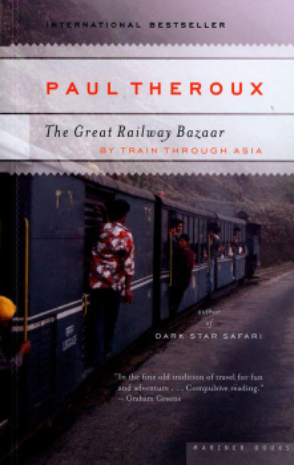 If you liked this book, you might also enjoy Karl Bushby’s Giant Steps, which details Bushby’s attempt to walk from the tip of South America back to his home in England. I’ve reviewed this remarkable and fascinating book here.

One thought on “Travel Books That’ll Knock Your Socks Off: “The Great Railway Bazaar””