As someone who lived in Nice and frequently traveled into and out of the airport, I thought it would be helpful to provide Nice airport information that is current, accurate, and useful for arriving visitors. The details that appear below are correct as of June 30, 2019.

If you’re taking the bus into the city center, you’ll also find detailed information on:

Depending on which airport you arrive from, you might need to go through Passport Control and then Customs before leaving the secure area. Although I speak only basic French, in all the times I’ve passed through these checkpoints, I’ve never had any trouble with either. I’ve also never seen anyone else having trouble. As with all airport-related procedures, the key is to pay attention and not do anything to cause problems.

To make your movement through Contrôle des Passeports (Passport Control) as smooth as possible, do the following:

After you pass through Passport Control, you’ll move on to baggage claim. The process is the same here as it is in every other airport, so there should be no surprises. After collecting your bags, you’ll walk through Customs before you exit the secure area.

In French, the word for Customs Department is Douane. If you were given a Customs declaration during your flight to Nice, have it out and ready to present to the customs official. As with Passport Control, the key to getting through smoothly to be organized, polite, and accommodating.

Throughout the airport and the city of Nice, you will frequently see armed military personnel doing security patrols. This is not an indication that anything bad is currently going on, it is only a precautionary measure. So don’t be alarmed. Also, don’t try to take their photographs without asking in advance.

The following agencies have desks at Nice Airport:

To get to the car rental desks, do the following:

Both terminals have an Interchange currency exchange booth in the public areas.

Information on local hotels is available via an electronic bulletin board located directly ahead of you as you exit the secure areas of both terminals.

As is the case at every airport in the world, there are lots of toilets in both the secure and public areas of both terminals. Just look for the internationally recognized man and woman symbol on the overhead signs.

The Tourist Information desk in both terminals is located directly ahead and slightly to the right of you as you exit the Secure Arrivals area.

Free wifi is available throughout both terminals. The network name is Nice Airport Free Wifi. You’ll need to sign in, after which you’re free to use the service as long as you want.

There are two express buses from the airport into the city center: Bus 98: Promenade des Arts and Bus 99: Gare Nice Ville/Gare SNCF. Both cost 6 euros for adults and it seems to be up to the discretion of the ticket seller and driver whether children pay or ride for free.

In addition, the N100 bus runs from Terminal 1, Platform 3 to Nice Port a few times a night on Thursdays, Fridays, Saturdays, and holiday eves. Note that the N100 does not go to Terminal 2, so you would need to catch the shuttle to Terminal 1 if this is the bus you want to catch.

For reasons that make no sense to most people, the N100 buses do not display the number N100 on the front and when you get on board, you’ll likely see the route map for an entirely unrelated bus line. Confirm with the driver if you’re unsure if you’re on the correct bus. And know in advance where you want to get off as there will be no list of stops available to you after you get onboard.

The N100 bus costs 1 euro 50 cents and in addition to the Port, it stops in Beaulieu, Monaco, and Roquebrune before terminating in Menton.

The English website for the public bus system in Nice is Lignes d’Azur. To double-check the bus schedules, click the Timetables link in the top right corner, then enter 98 or 99 in the field that says Numéro ou nom de la ligne. 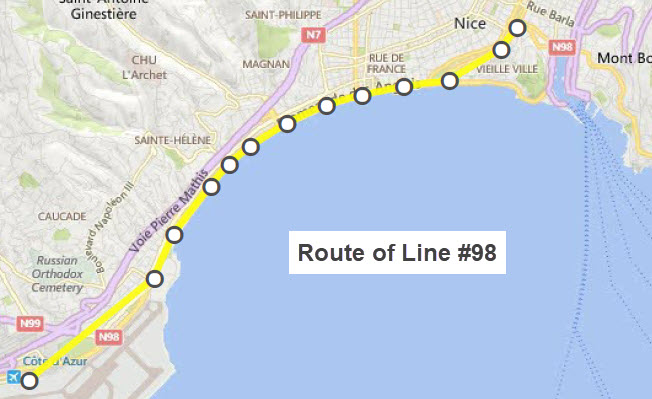 Express bus #98 departs from the airport every day of the year except May 1.

Buses run every 17-40 minutes, depending on the time of day and traffic conditions.

The line ends at the Musée d’art moderne et d’art contemporain (Museum of Modern and Contemporary Art), a collection of huge white blocky buildings at the end of the park. 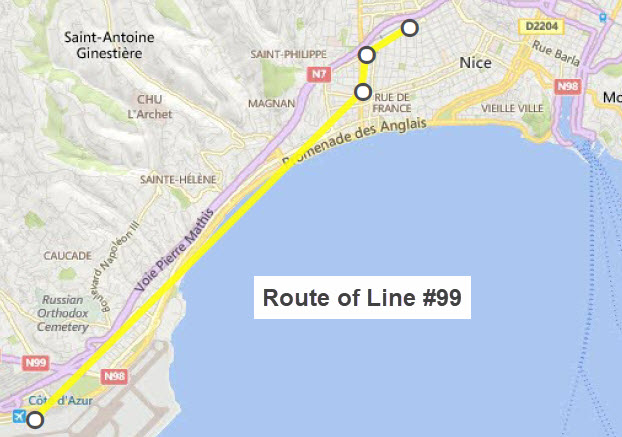 Express bus #99 goes from the airport to the main train station,  Gare de Nice Ville, also called Gare SNCF. It departs every 30 minutes beginning at 7:53am, with the last bus at 8:53pm, seven days a week. The service does not run on May 1.

NOTE: Due to a huge construction project at Nice Ville station, the #99 bus route now ends 100 yards west of the station.

As of June 28, 2019, the new metro line from the airport goes as far east as Avenue Jean-Médecin, the main shopping and hotel area of Nice. Jean-Médecin Station is underground. If you get off here, you can take the escalators up to the surface and connect with the existing above ground metro line, Ligne 1. By fall of 2019, the entire line will be open, running from Terminal 2 at the airport to Terminal 1 and then all the way to the port.

The metro leaves from just outside the baggage claim area. Trams depart as frequently as every 12 minutes during busy times. Purchase your tickets from the ticket machines on the platform.

The rate from the airport into Nice center is FIXED at 32 euros, which includes your luggage. You can confirm this yourself by referring to the Nice Airport website. If you’re planning to take a taxi, ask in advance what the fare will be. Walk away if the driver’s price is higher than 32 euros.

Two separate groups of houseguests reported being ripped off by taxis when coming from the airport. One group of friends was charged 60 euros to get to the port (about a 6 minute drive beyond the center) and another got in the taxi and suddenly found another couple crammed in with them — both groups being informed that the cost would be 35 euros each (70 euros total), despite sharing the cab. My friends ended up being taken first to the couple’s hotel, which was nowhere near where my friends were headed, so the trip was 20 minutes longer than it should have been.

Taxis are available directly ahead of you as you exit the secure areas of both terminals. As is common in many cities, taxis with a green light on top are available. Those displaying a red light are unavailable. Most taxis do not take credit cards, so make sure you have cash on hand before getting in the cab.

An alternative to taxis is to take Uber from the airport. A fare from the airport to Place Massena (in the middle of town) is listed as between 16 and 22 euros. This will vary depending on the time of day, the day of the week, and the amount of traffic involved. In any event, it should cost significantly less than a taxi.