Semi-True Tales from My Life So Far: Borrachos, bulls, and big big booms

During the third week of March each year, the small town of Villareal, Costa Rica holds its annual Fiestas Patronales (Patron Saint Festival). Designed to celebrate and showcase the bravery and skills of the local cattlemen, it’s the biggest event in this little corner of Guanacaste Province. The Villareal rodeo is the highlight of the fiesta and is the sort of non-touristy event that most solo travelers dream about. A chance to experience the culture, traditions, and lifestyle of the region in a way that no tourists group could ever hope to do.

The Villareal fiesta is similar to a lot of small town fairs. There are popup booths selling trinkets and candy. There are a lot of noisy, flashing kiddie rides and games of chance with dubious prizes. And there are food stalls selling meat dishes, meat dishes, and for those who don’t like meat, other meat dishes. For those more thirsty than hungry, there are four beer pavilions, each capable of seating 100 people. In a town with a population of 400 people, it’s good to know that they’ve got their priorities in order.

The highlight of the fair each year is the bullring they construct in the middle of the town square. It’s about 100 feet across and bordered by one of those Wild West cowboy types of fences with the horizontal poles and vertical posts. The semi-circular “grandstand” behind the fence is roughly 20 feet tall and made entirely out of 1″ x 10″ boards. It’s nailed together and has a rickety appearance that isn’t helped any by the alarming number of only partially hammered-in nails visible on every surface. It’s most assuredly the sort of thing a drunk 5-year-old would put together for a class project on “Dangerous Architecture.”

The way the Villareal rodeo works is there are bulls, there are bull riders, and there’s anyone else who wants to climb into the ring. 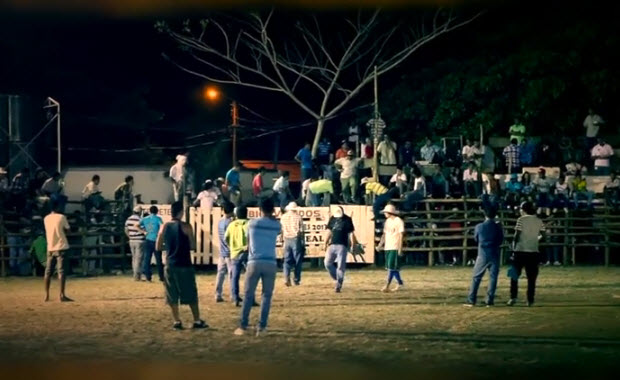 At the sound of a horn, a bull comes flying out of the chute with a semi-sober rider on its back. Right into the midst of the 40-50 people in the arena, who surge around the bull as it tries to kick the rider off its back. 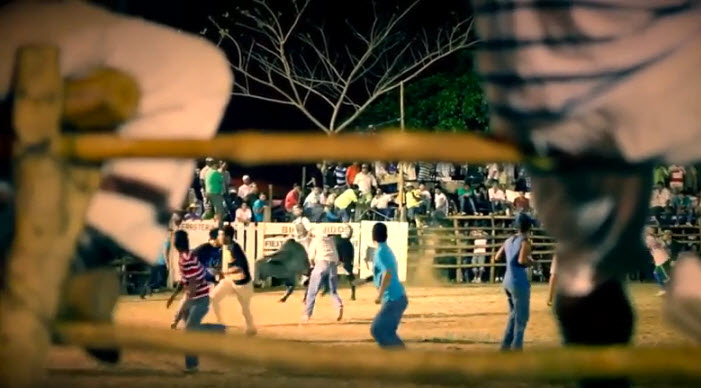 As soon as a rider falls off, either because of the bull or the alcohol they’ve consumed, the bull starts chasing the people in the arena. And each time, the crowd roars its approval. Especially if the bull takes a special (i.e. dangerous) interest in a particular person. After a while, though, the bulls all seem to reach the same conclusion: that this is all kind of insane. They then just stop moving around as if to say, “I quit. Y’all ain’t worth it.”

At this point, a team of three Guanacaste cowboys rides into the ring, lassoes swinging as they try to catch the bull that isn’t actually moving around a lot. With 40-50 semi-intoxicated people in the way, though, the job is harder than it looks. More often than not, the lassoes snag a few drunk spectators before “capturing” the bull.

The most fascinating part of the whole spectacle occurs whenever someone gets hurt. Their friends immediately pick them up and rush them to a solid 10×8 section of the fence painted with a red cross. As each group approaches the wall, a little window the size of a laundry chute opens in it. The person’s friends then literally throw the injured daredevil feet-first through the opening. They then turn and dash back to the mayhem in the middle of the ring. On the other side of the wall, ambulances wait in line to transport the injured to the local hospital. Fortunately, no major injuries occurred the night I went and the Villareal rodeo provided more entertainment than drama. Until the fireworks show kicked off.

The grand finale: a.k.a. The end of the world

I don’t know about you, but I like fireworks shows. Being able to sit back and watch the colors burst overhead. Hearing the crowd oooh and ahhh. I’m not such a big fan, though, of being inside a fireworks show. Apparently, in Villareal, they don’t have enough money or gunpowder to pull off a normal fireworks show. The kind of show where the fireworks shoot way up into the sky before exploding. Instead, they put the fireworks in the middle of the ring, which is, as you’ll remember, only 100 feet wide. When they start lighting the pyrotechnics off, the results are kind of what you might expect. Like having a front row seat to the end of the world.

The fireworks shoot 100 to 125 feet into the air and then explode directly overhead. The rickety wooden grandstand shakes violently and everyone on it loses their hearing for just a second or two. And then the still-glowing firework tails start landing on people’s hair and clothes and food.

Remarkably, no one got hurt during the 15 minute show I witnessed. Or during the grand finale where about 100 sparkly bursts suddenly rose to eye level then exploded like mini-supernovas. The crowd loved it and cheered for more. Even as they were walking to their cars afterward, I could hear them raving about how wonderful it had all been. And it was wonderful. Unnerving, literally mind-numbing, and absolutely over-the-top. But wonderful. And marvelous, too. The sort of thing I couldn’t possibly have dreamt of beforehand. The sort of thing I could never, ever enjoy back home because it was too unpredictable. It was too dangerous. In short, it was too much fun. Which is why I travel. So that someone else doesn’t get to decide for me how much fun I can have in life.

The festival is held over six days during the third week of March each year. The Villareal rodeo takes place on Saturday evening.

Villareal, Guanacaste Province, Costa Rica. Villareal (also spelled Villa Real on some maps) is 3 miles inland from the major tourist town of Tamarindo. The nearest airport, Daniel Oduber Quirós International Airport, is approximately 40 miles away in the town of Liberia.