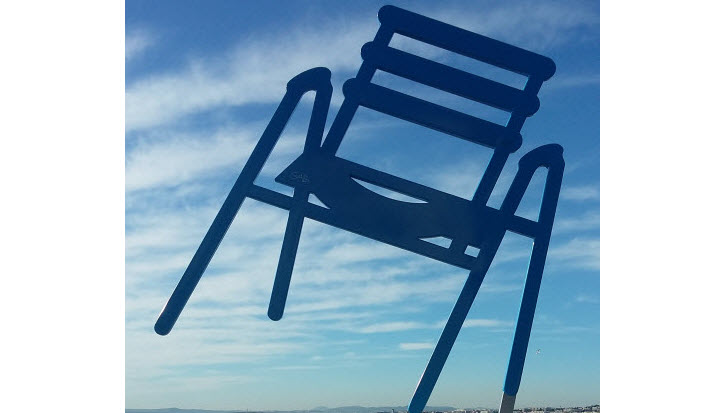 Allons-y! Your walking tour of public art in Nice

The purpose of this walking tour of public art in Nice is to introduce you to some of the more interesting artworks on display in town. With the exception of the stairs at the beginning and end, the tour takes place on level ground. The entire tour can be completed in about an hour, but there’s no reason to rush. I recommend taking your time and enjoying the sights and sounds of the parks and promenades you’ll be passing through.

The tour begins in the rooftop plaza located in front of the main entrance to the Théâtre National de Nice (TNN). The plaza is above the street-level parking garage, between the TNN and the Musée d’Art Moderne et d’Art Contemporain (MAMAC). You can access the plaza via the set of stairs leading up to MAMAC off rue Cassini.

Once you arrive in the plaza, you’ll see two permanent sculptures on display and perhaps two or three temporary ones. Because it serves as the gateway to MAMAC, the plaza hosts a steady stream of new outdoor sculptures. 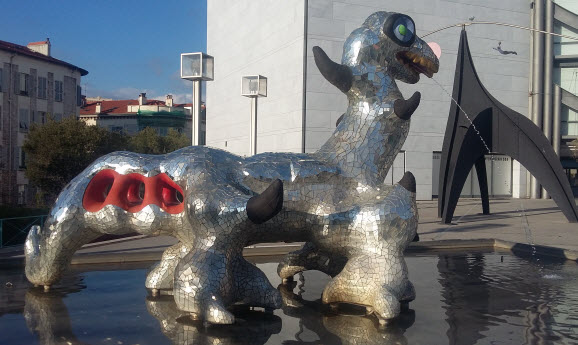 The work, covered in ceramic panels, is part of a series entitled The Injured Animals. The following close-up shows the details of the head of the monster. 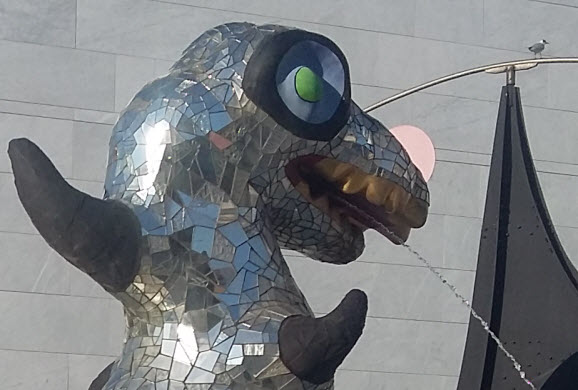 Saint Phalle is most famous for developing a style of art she called Nanas, which are light-hearted, colorful, large-scale sculptures of animals, monsters, and human figures. If you visit the Hotel Negresco, you can see her statue of Miles Davis outside to the left of the entrance and her Nana Jaune (Yellow Nana) in the Royal Salon. 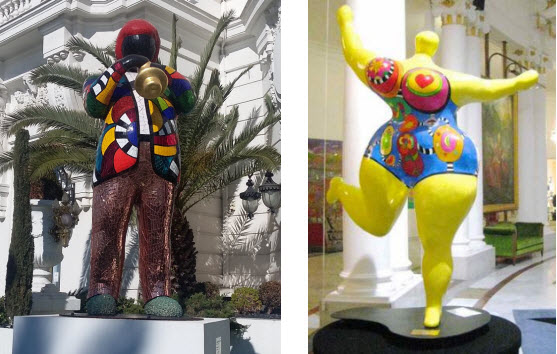 The artist donated 170 works to MAMAC in 2001, many of which are currently on display inside the museum.

Stabile Mobile (1970), by Alexander Calder. Calder was an American sculptor best known as the originator of the mobile and stabile (immobile mobiles) art forms. 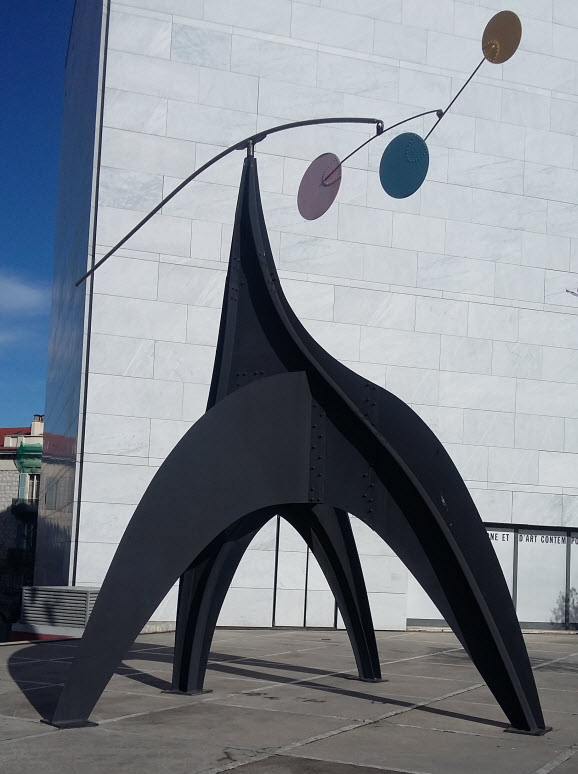 With regard to his inspiration, he said, “Why should art be static? Looking at an abstract work, be it a sculpture or a painting, we see an exciting set of shots, spheres, meaningless kernels. It may be perfect, but it is still. The next step in sculpture is movement.”

Walk down the stairs behind the Loch Ness monster to Avenue Félix Faure, then turn left. Walk approximately 100 yards, then cross the street and enter the Promenade du Paillon.

Shortly after entering the park, you’ll come across a bronze replica of the statue of David by Michaelangelo. 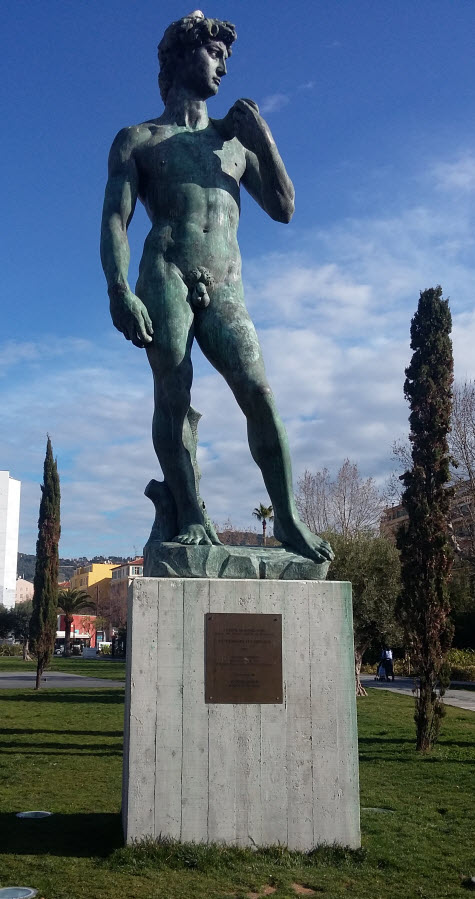 Smaller than the marble original, it was created in 1995 by the Fonderie d’art Testoni in Pietrasanta, Italy. The Mayor of Nice, Christian Estrosi, wanted to celebrate classical and modern art in Nice’s public spaces and local artist, gallery owner, and Italian native Antonio Sapone commissioned this work.

Continue walking through the park, passing the children’s play area and the Miroir d’Eau (Mirror of Water), the large fountain with dozens of water jets shooting out of the ground. As you exit the gate past the fountain, you enter Place Massena.

The Conversation a Nice sculpture by Spanish artist Jaume Plensa is located on both sides of the tram line running through the Place Massena. The work consists of 7 giant figures perched atop high poles along the tram line. 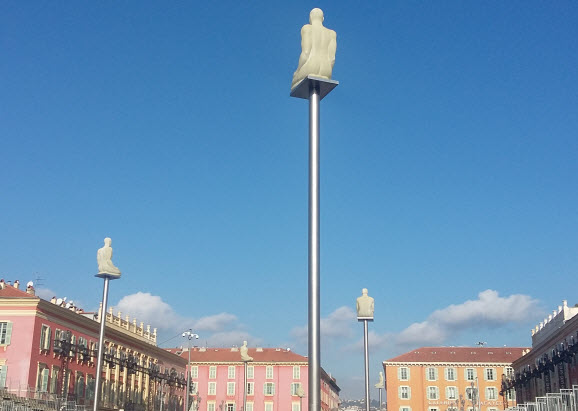 The figures, which represent the seven continents, slowly change color at night. Plensa intends this to symbolize “the dialogue between the communities making up our society.”

Another of Plensa’s sculptures that is more approachable, literally and figuratively, is his La Nomade d’Antibes. Located atop one of the port walls in Antibes, it’s a stunning depiction of a sitting man with his knees pulled up to his chest. Created entirely out of connected letters, it looks light and fragile despite its vast size and weight. For best effect, you should try to see it at night when it’s lit from below. 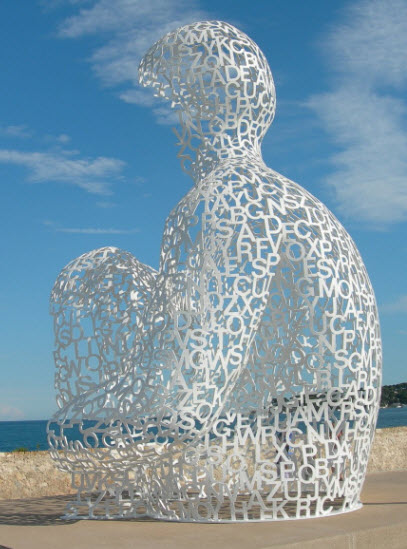 Cross the tram line and re-enter the park. You will immediately see the enormous Arc 115º5 sculpture by Bernar Venet. 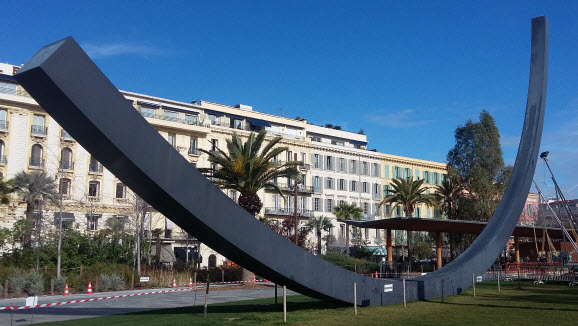 In describing his works, Venet says:

“My sculpture is based on concepts that appear to be divergent, but which in the context of my activity organize themselves in a complementary manner: order and disorder, the determinate and indeterminate. We know that matter, nature, and life organize themselves according to complementary principles (organization, disorganization), and my work is no exception to this universal model.”

A Conversation with Bernar Venet, A Renaissance Artist of the Third Millennium
Interviewed by Laura Tansini, Sculpture Magazine, May 2004

Nearly four stories tall and 100 feet long, Arc 115º5 represents the curvature of the Baie des Anges (the Bay of Angels) on which Nice is located. This is the first of three Venet sculptures on the walk.

Continue through the park as it curves toward the Mediterranean. Approximately 75 feet before you reach the exit gate, on the left in the bushes there’s a life-sized statue of a mountain lion devouring a deer. 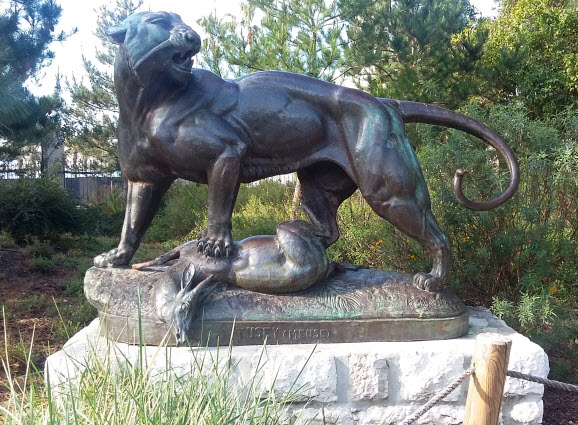 The base of the statue contains the words “TUSEY (MEUSE)” and a signature that might be Massol along with the year 1869. I could find no details about this statue or discover why such a chilling tableau is next to a merry-go-round.

Exit the park, cross the road, and turn left so you’re walking down the Promenade des Anglais, which almost immediately becomes the Quai des Etats Unis. A short way down, at the entrance to the Plage Beau Rivage is Le Grand Chaise Bleu (the Big Blue Chair) sculpture by Sabine Geraudie. 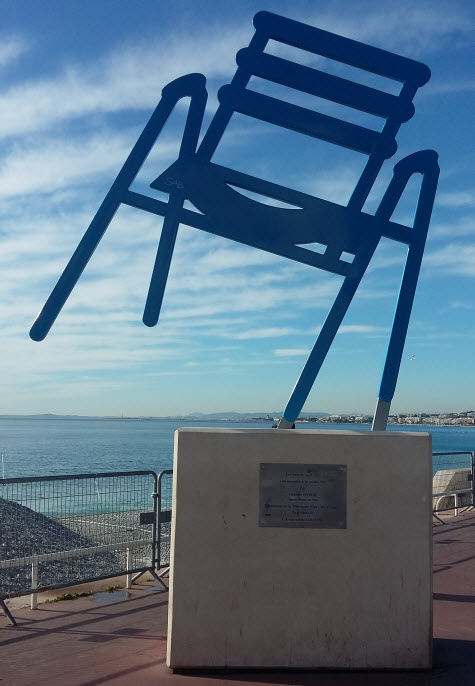 The blue chairs are an unofficial city symbol and you’ll see rows of them up and down the promenade and the quay. Sabine, known by her artistic name SAB, views the blue chairs as a powerful symbol of Nice and chose to recreate the chair, but adapt it to two dimensionality “to really give it a specificity and originality.”

When you’re ready, continue down the Quai des Etats Unis for about 100 yards. Across the street and in front of the Esplanade Georges Pompidou is the second work by Venet. Called Neuf Lignes Obliques (Nine Oblique Lines), the sculpture commemorates the 150th anniversary of the annexation of the Compte (county) of Nice by France. 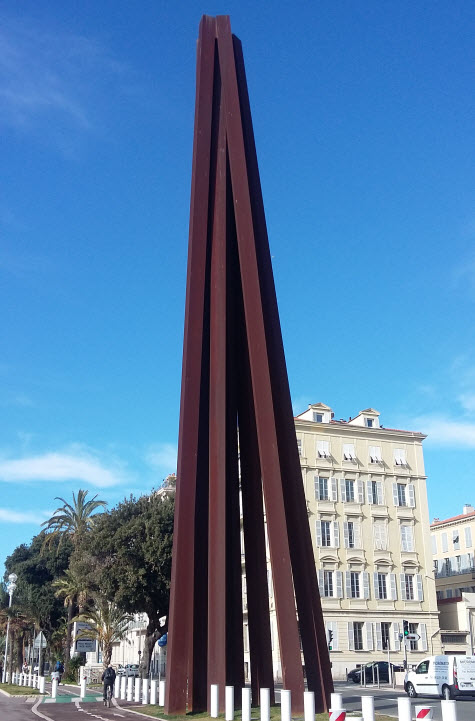 The nine steel beams, each nearly 100 feet tall, represent the nine valleys near Nice, uniting as one at the top. Not surprisingly, the sculpture has generated a lot of negative reactions not just for its oversized, monotone bleakness but because of its central location in the Old Town. One critic referred to it as “rusty steel bars that severely cut the landscape between the Old Nice and the sea” and wondered if the beams were originally supposed to be used for the underground car park that is beside it (they weren’t).

Cross the street and pass through the small Esplanade Georges Pompidou park. Turn right and you will see the side of the Hôtel de Ville (City Hall) on the left. Walk to the corner of the Hôtel de Ville and turn left into the rue de l’Hôtel de ville. In the courtyard in front of the main entrance is the Le Pouce (The Thumb) sculpture by César Baldaccini. 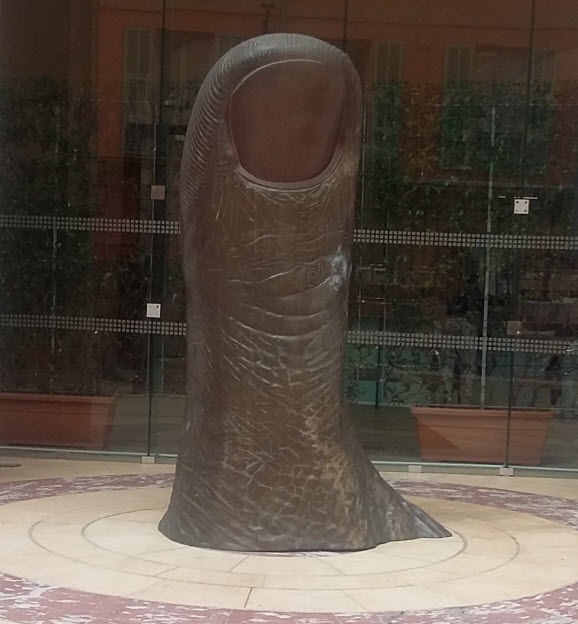 Created in 1963, the work is the smallest of a series of thumb sculptures that César installed throughout France. The largest, standing over 40 feet tall is in the middle of a traffic roundabout in the La Defense neighborhood of Paris. As a leader of the New Realism movement, César was famous for two variations of his art. The first were what he called radical compressions. For these works, he would place derelict cars, counterfeit watches, or other items into a massive compactor and then display the crushed block as art.  The second variation was what he called radical expansions. For these, he would create huge versions of small objects. This Le Pouce sculpture is a prime example of this form.
Side note: César also created the “Cesar” statue, which is given out by l’Académie des Arts et Techniques du Cinéma in France. It is equivalent to the Oscar given out by the Academy of Motion Picture Arts and Sciences in the U.S.

Stop 10: Replica of the Statue of Liberty

Return to the Quai des Etats Unis and continue heading east toward Castle Hill. Directly across the street from the Nice Opera House you’ll come across a mini replica of the Statue of Liberty. 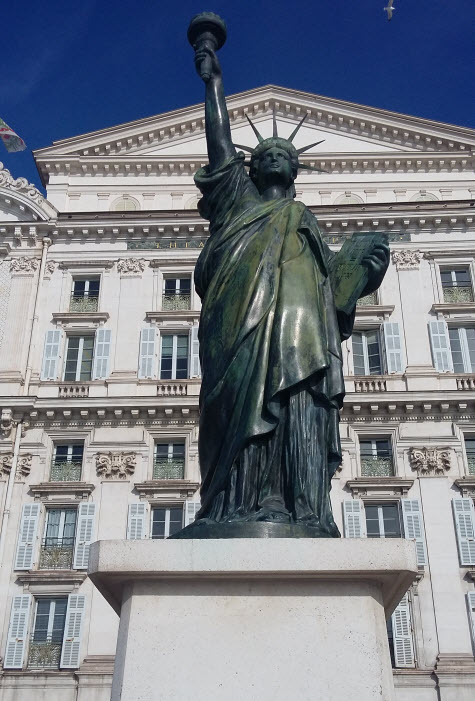 The statue was erected in 2014 to commemorate the renovation of the Quai des Etats Unis. The quay, itself, is named after the United States in honor of the role America played in helping France and its allies in World War I.

Cross the street and continue a very short distance toward Castle Hill. The twisted statue beside the Gallery des Ponchettes is the third Venet sculpture on this tour. Called Ligne indéterminée (Undefined line), Venet created the sculpture in the early 1980s as part of his series Ligne indéterminées. 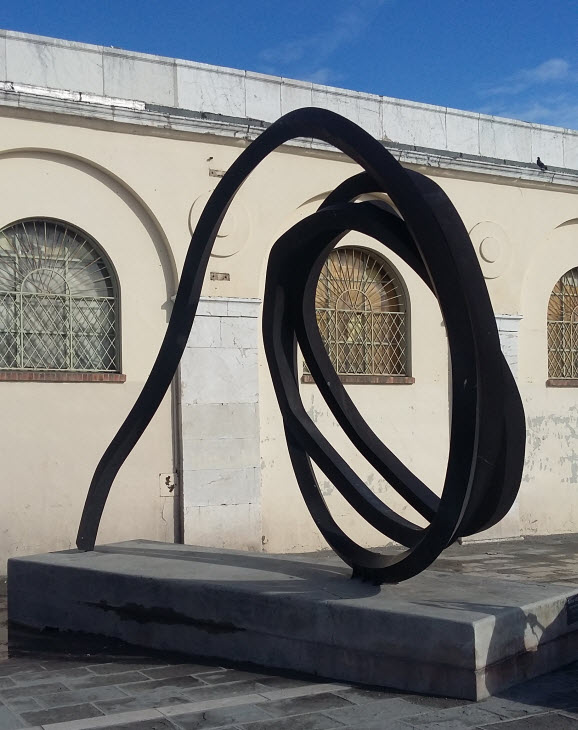 You can see the other sculptures displayed in Paris, Berlin, Tokyo, Strasbourg, Beijing, Austin, San Francisco, and Grenoble. One reviewer explained Venet’s intent by saying, “Disorder, complexity, indeterminacy become obsessions that he translates plastically with a sense of purity, sobriety through radical gestures inspired by arithmetic.” Perhaps the original French version of that quote makes more sense.

Continue along the promenade until you reach Castle Hill. The final stop on the walk is at the top of the hill. If you feel energetic, walk up the stairs to the left of the Hotel Suisse. If you’re not up for the walk, take the free elevator that goes almost the whole way up. The entrance tunnel leading to the elevator shaft is underneath the stairs, as seen in the image below. 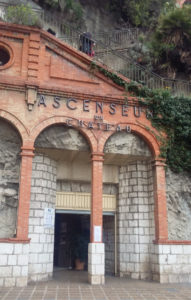 When you reach the top of the stairs or the elevator, walk up the gently sloped path. This leads to a large flat children’s play area that takes up the seaward side of the hill. On the far side, overlooking the port, there’s a series of 13 broad, low steps containing inlaid stone mosaics that follow the classic tale of The Odyssey.

Scattered throughout the park are numerous other mosaics, some classical and some modern. Just below the waterfall and slightly northward away from the sea is a parking lot. The chest-high retaining wall here contains another series of beautiful Greek-inspired mosaics. Some of the best appear below, but all of these works make the trip to the top of the hill well worth the climb.

That’s the end of this walking tour. From the top of the park, you can head in any direction. Separate paths lead downhill to Place Garibaldi, the port, the seafront where you came from, and the Old Town.

Next Steps (Pardon the Pun)

If you enjoyed this guided tour, On The Go Solo will be adding details about the following walks soon. So check back again: