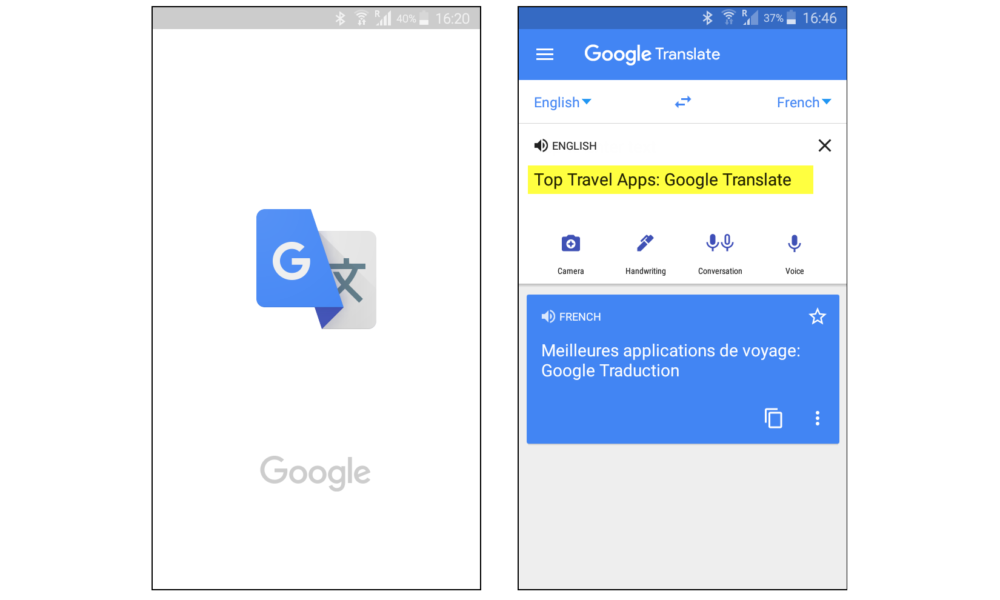 When traveling in non-English speaking countries and Australia the Google Translate app is my lifeline. In fact, it’s probably the most valuable travel app I’ve got on my smartphone. And the great thing about this free translation tool is that it’s being continually updated by some of the best developers in the business. Which means that it’s likely to just keep getting better and better. Each of the key features of the app is described in detail below.

The app is available for Android and iOS devices. There’s also a website version you can access from your desktop at https://translate.google.com/. Note that the Conversation and Camera features are not available in the desktop version.

All major languages on the planet and a wide range of minor ones are available within Google Translate. From Afrikaans to Zulu and from Amharic to Yoruba, you can translate into and out of languages rapidly and effortlessly.

The dictionaries for most languages can be downloaded in advance. That means you can use the app even when there is no wifi or cell phone reception. Over the years, this has come in quite handy on long trips where cell service was nonexistent. 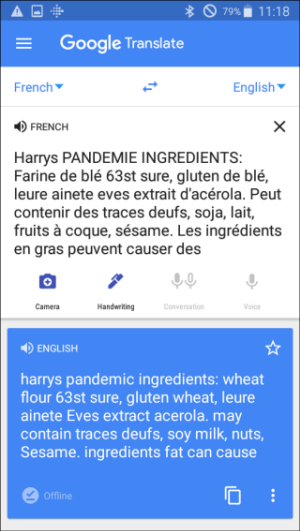 This has the potential to become the best feature in the app. The idea is that you hold your camera up to a block of foreign text, such as a sign or a newspaper article, and the app automatically translates the words within your camera lens. You then take a picture and the app creates rectangles around each word. At that point, you have the option of clicking on an individual rectangle to see the translation or clicking a SELECT ALL button to view the full translation.

The translation then appears on a new screen with the original text displayed above it.

Although this technology is quite amazing, it’s still very much in development. Some words are translated and some are not, as you can see in the image for the ingredients list on a loaf of bread. The phrase “farine de blé” is translated correctly as “wheat flour,” but “soja, lait” is incorrectly translated as “soy milk.”  Note that the French “pan de mie” (honey bread) is mistakenly replaced with the word “pandemie” (pandemic) in the original version and “d’oeufs” (eggs) is replaced with “deufs.” 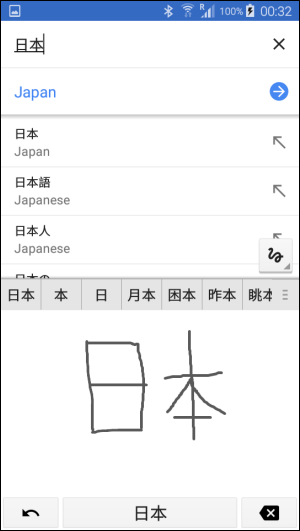 This is a very handy feature when you’re traveling in a country where you can’t read the language. It allows you to write characters or text using your finger and the app then tries to figure out what word you’re trying to write. If what you’ve written is not an exact match for a word in the foreign dictionary, the app automatically displays all words that are similar to it.

In the example, the app has listed seven possible Japanese words that might be what you’re trying to enter in the field. You can then simply click on the word you’re trying to translate. For a language like Japanese, where single characters can have as many as 16 different strokes, this is invaluable. It permits you to enter just a rough approximation of the word you want to translate. You don’t have to be exact. For a language like Arabic, it allows you to enter a word without knowing where one character begins and another ends. 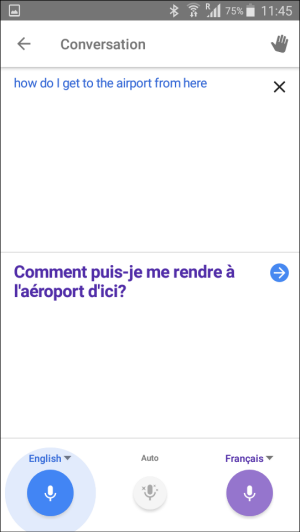 Conversation is the newest independent feature in Google Translate. Previously, it was accessed through the Voice button and was less intuitive with no retained history. The idea is that as you speak into your phone’s microphone, the translated version is automatically played out loud. The person you are speaking with then replies in their language and their words are translated and played out loud.

An optional feature allows the app to automatically detect the language being spoken. You don’t have to select English, then speak, then manually change languages before the other person can reply. There’s a real “Blade Runner” feel to this feature. For the first time ever, it makes the sort of auto-translated conversations you see in sci-fi movies seem plausible. Assuming Google keeps developing this technology, it seems likely that someday soon we’ll be able to converse in languages we don’t speak. 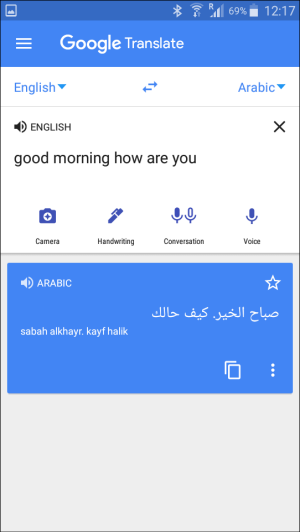 The Voice feature was added to Google Translate in 2015 and is in effect a simpler version of Conversation. To use it, you simply speak into a microphone and the translation appears on your screen. There is no audio output by default. You can, however, manually click the speaker icon beside the translated word and hear the pronunciation.

I’ve used this feature multiple times a day over the past few years while living in Europe. When I’m traveling, it’s much easier to turn Voice on and read the signs I’m looking at rather than type each word into the app. In restaurants, too, it’s useful for quickly translating menu items I’m unfamiliar with.

This is an excellent app to have on your smartphone and one I strongly recommend downloading and installing.

That said, I do have some minor complaints about it.

The different components of the app don’t always seem to recognize phrases. As a result, translations are sometimes literally word-for-word, rather than contextual. For things like ingredients lists on a box of cereal, this isn’t a significant issue. But for more complex text, such as that found in a newspaper article or book, it can pose a problem. As an example, the app translates “drop in and see me” into Japanese as “looking down on me.”

As mentioned above, the Camera feature needs a lot of work. At the moment, the app translates some words but doesn’t translate others. And some of translated words are incorrect. In addition, the software seems to have difficulty figuring out the words in the photo, especially if they have apostrophes or spaces. The result is that it starts with the wrong word in the source language and then translates that.

The Conversation feature also seems to be a bit buggy. This is likely due to its reliance on cutting-edge technology rather than on lack of attention to detail by the development team. If you click the Auto button, there’s a significant lag-time between when you speak and when you hear the translation. In addition, it doesn’t seem to allow you to continue the conversation without clearing the screen first. Despite these growing pains, I expect this feature to become very powerful as more development work is focused on it.

If you found this information helpful, check out our reviews of these other travel-related apps: